A little bit of Bling Bling..

– Key started calling Jonghyun “Jjong” a long time ago, and now a lot of fans call him that too.
– Jonghyun was ranked 27 for The Most Handsome Faces of 2017.
– There is a game named after him, called “Jonghyun’s Game” (it’s famous on the variety show “Ask Us Anything”).
– His official color is blue and his fans are called “blingers” because of his title “Bling Bling Jonghyun”.
– Jonghyun dated actress Shin Se-kyung (2010-2011)
–   Jonghyun once mentioned that his sister and him lived with his grandparents (on his mom’s side) for two years.
–  His parents were married in 1994 when his mom was twenty seven, sodam was six and jonghyun was four. Jonghyun once mentioned on blue night that, in their wedding video, he can be seen crying throughout the entire ceremony.
- Jonghyun can move his ears.
- in London in November 2011, when asked who greatly influenced him. He said he was influenced by many of his seniors, but personally Wheesung and Naul.
- Said he was recovering from chicken pox in early December 2011,  at Minhos birthday  party.

​- Jjong said he suffered from sweaty palms, so holding hands wasn’t his thing.

- When Jjong was writing Selene 6:23, he briefly wrote, “I’m hungry,” while working on the first verse of the song.

On September 5, 2013. Kim Hee-cheol uploaded his picture with Jong-hyun on his Instagram account with a comment, “Together with Kim Jong-hyun from the shining SHINee. Kim Jong-hyun’s own cockiness and sneering face capture the hearts of all women. Always cheer up!”
In the picture, Kim Hee-cheol is showing tough eyes and Jong-hyun next to him is slightly smiling with his hand on the table, giving off the feel of a chic city man.
Fans responded with comments such as, “Wow, Jong-hyun’s arms!” “They are cool. Both of them are my ideal type” and “Go, the shining SHINee!”
Kim Hee-cheol and Jong-hyun belong to the celebrity social club –  – Kim Hee-cheol and Jong-hyun belong to the celebrity social club JJokobol (people who may look a little bit crazy but are actually attractive). 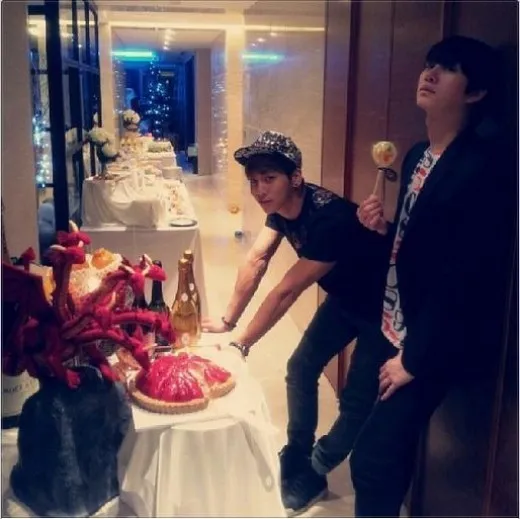 Words that nearly got in the lyrics of Selene 6:23

Jonghyun’s lyrics notes contain words that were almost included in the song. Let us look for the words that were not picked for‘’The Distance Bewteen Us (Selene 6.23)’ but are worth having a look.
‘My tears surge like waves.’ Pass as it is too childish.
‘Even if I reach my hand to you’. Pass as it is too direct.
‘I end up looking for you whenever I am lost. I say hello and talk alone.’ Isn’t it good in its own way? Jong-hyun, however, excluded the sentence from the lyrics for ‘The Distance Bewteen Us (Selene 6.23)’ by saying, “It sounds like the song Snail.” On Blue Night February 10th 2014, Nine asked him why he didn’t like Spring. It was here that we first found out that Winter was his favourite season.

Regardless of anything, no matter how many times he had performed on stage, whenever he hears his own song he will still get exceptionally excited, will lip-synch along, dance along, fidget around in his seat, even when he chokes on water he will still remain engrossed. 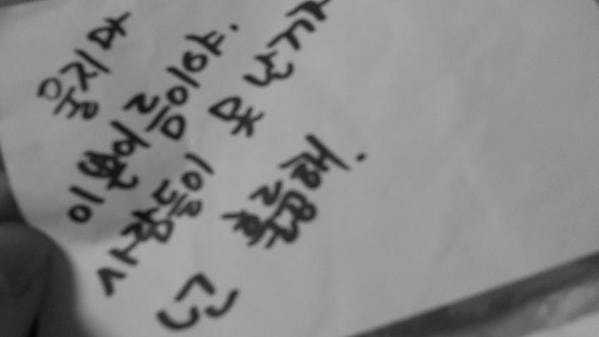 .A SHINee fan shared a touching personal experience with member Jonghyun during a fan sign event after he far and beyond to cheer her up.
On May 27th through the online community board DC Gallery, the fan revealed that she was ashamed of her name and did not want to share it with SHINee. Coming up to Jonghyun to get a signature, she initially told him not to include a name prompting him to ask her, “Then what would you like me to write?”
The fan goes on to explain that due to her shock, “Suddenly, my mind went blank so I asked him to write my actual name,” she writes on her post. She then continues to explain that she had wanted to tell him that his radio show Blue Night had given her much comfort but before she could go further, burst into tears soon after mentioning the show.
“Why are you crying?” he had asked her, but the manager present had pressed her to move along the line and ended up in Onew‘s fan sign line soon after.
She continued, “I briefly made contact with Jjong and he mouthed out the words ‘Don’t cry’..even when I was getting Jinki (Onew)’s autograph, Jjong poked me in the arm when he had a break from his line and told me not to cry..I was really having a mental breakdown so I couldn’t tell SHINee all I wanted to say that I planned and went back to my seat to wait, then Jjong wrote something and a staff member brought the note over for him..”
“Though I wasn’t crying because of my name but because of SHINee ㅠ It’s embarrassing, but at the time it felt like all the times that I’ve gotten hurt because of my name were suddenly getting healed.”

The original poster then posted up the note from Jonghyun, which read, “Don’t cry. It’s a pretty name. It’s other people who are foolish. You are incredible." 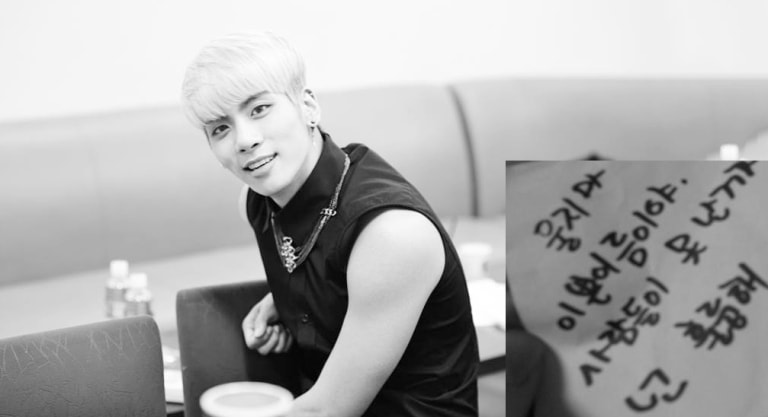 Jonghyun was bullied at school and also why he bought many new phones.

Jonghyun appeared as one of the first MCs on KBS 2TV's pilot program 'Music Show.' For a week, the five MCs will discuss issues that affected them in some way or another.
One of the things they talked about was the growing problem of cyber bullying. During this discussion, Jonghyun surprisingly revealed that he had been bullied before, as well. He said, "I once experienced being an outcast in middle school. I was in the band during middle school so I attended a festival at a girl's school and got a little bit famous; consequently, the sunbaes called me over and hit me. Their reason was that they did not like how I looked at them." He continued, "At that time, I did not tell my parents. That did not end after just one time."
He also talked about his habit of purchasing a new cell phone after breaking up with a girlfriend. He was asked whether he erased all the pictures after he ended a relationship. Jonghyun responded, "I just get a new cell phone."

Yoo Se Yoon asked, "Do you put the other cell phone aside then? Does the number of cell phones equal the number of women you've dated?" making Jonghyun flustered and everyone else laugh.


Jonghyun said, "I heard if you erased pictures, people can pull them back up again. I'm definitely not saying I have pictures of us together. There might be messages remaining so I get a new phone." He also said how he did not feel like he had to erase past photos with his ex-girlfriend, but another MC suggested the next girlfriend might find these photos.
Jonghyun said, "That's bad," and Yoo Se Yoon again went into his joke with the cell phone collection.  Pretending to be the girlfriend, he asked, "Why are there so many cell phones?" and went "Omo," while acting as if he kept opening up new cell phones out of his collection and seeing past girlfriend photos to everyone's amusement.
Jonghyun said in an Interview that he was bulled when at school.  Link here:

[101012] Jonghyun and Key were injured at the Indonesian concert by fans.  Please… personal space because look what happened !

As you can see below the injury sustained by both Jonghyun, and Key was such that he needed to have a piggyback.
Sad when fans pay no respect to their personal boundary. Here was the reports a few days later at the airport. 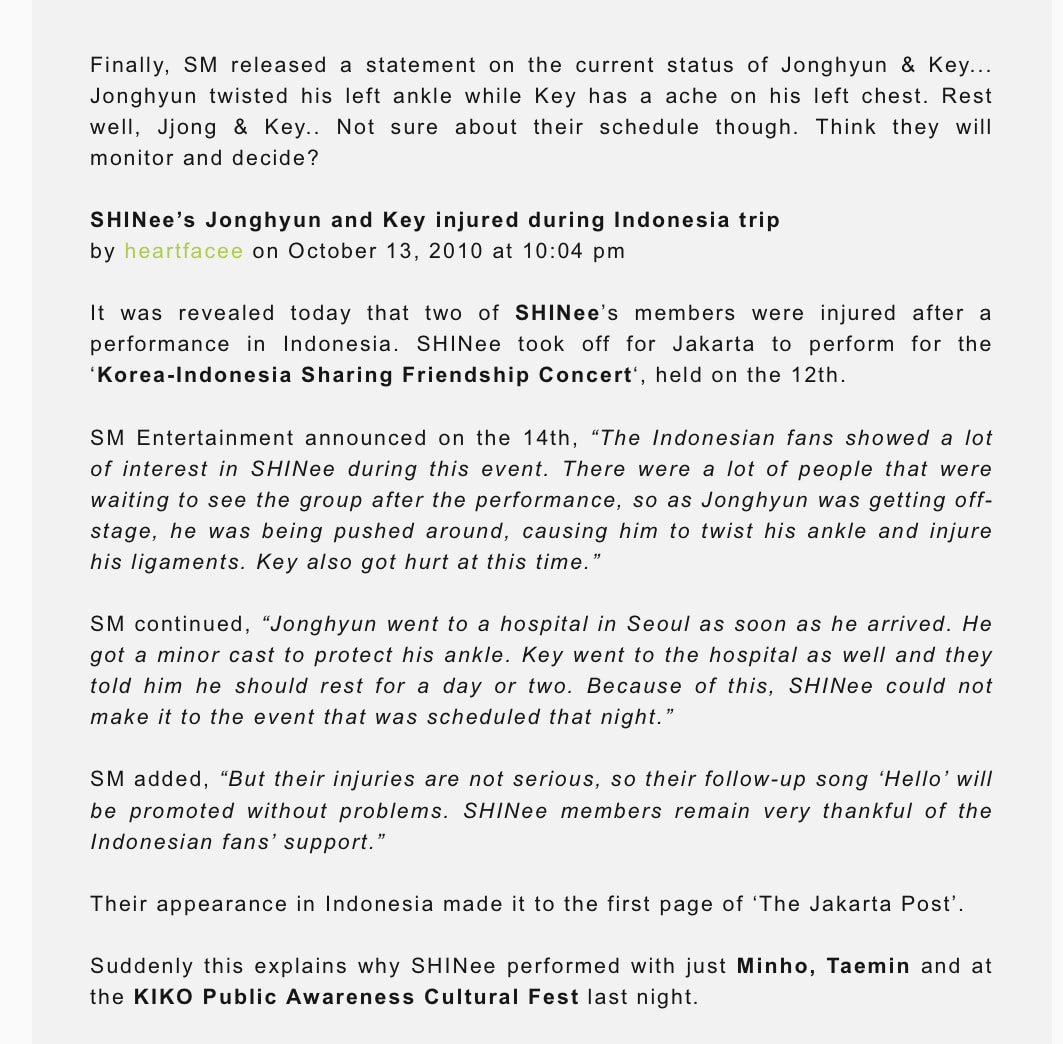 When I'm in England, I feel that the life there is very relaxed and also highly enriched with arts. So, if there's another chance, I really hope that I can go there again." — Jonghyun

When SHINee came to London. The Independent reported on the concert. This edition below was published November 26th, 2011.

​The article stated, “The loudest screaming I’ve ever heard isn’t at a pop concert at the O2, or the Pyramid stage at Glastonbury, or the Birmingham NEC – it’s ringing up and down the aisles of a cinema in central London”, adding that the cause of the screaming was, “a band you’ve probably never even heard of: SHINee, five pretty young men from Korea.” 😁
This concert was held at Odeon West End Theater of Leicester Square on the 3rd at 4:30 p.m. (London time) as the opening gala concert of ‘The 6th London Korean Film Festival.’ From early in the morning, local fans carrying placards written in Korean and Korean flag gathered around the theater.

SHINee’s ‘Juliette’ which was written by Jjong, is a Remake of Corbin Bleu’s ‘Deal With It’