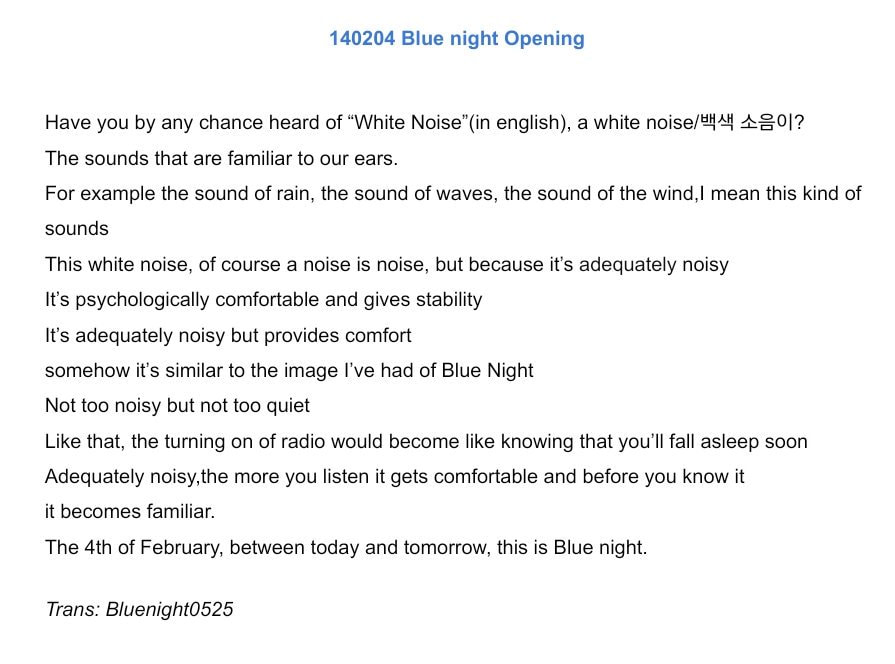 ​J: We talked about white noise a bit in the opening, for me I really like the sound of rain, it feels nice listening to the sound of rain while its knocking on the window.I like the sound of it while in meditation alone, getting drenched. It’s romantic right? I learned it for the first time today that these things are called white noise.There must be a sound that you guys like too. I like thinking alone while listening to the rain sound and I also really like the inclusion of rain sound in music too. I want to make a Blue night similar to the rain sound.

J: I think it matches well with the image of Blue night I had thought of: warm, quiet and comfortable.. It’d be nice if we can make such a broadcast together.

J: Today the first song we listened to was 매탈 포크 주니어의 여름 by 이지형 it’s a summer song, I heard today was a very cold day,Since compared to last year this year’s winter isn’t really that cold, today you can feel the cold even more..Since there were successive warm days and it suddenly got cold.That’s why, in order to feel warm with music I chose this song Me too right now my mind is really cold (smiles) I’m freezing a lot , right now following yesterday too. I’m nervous a lot and I’m frozen stiff again. I’m excited too, while listening to this music together with you I got to relieve my stress.

J: I had a lot of thoughts when I went back home yesterday after the broadcast ended, when I arrived home I had a lot of talk with my mom and noona I think I went to sleep around 6? 7 am. I was excited and had a lot of regretful things remaining that I couldn’t sleep and just kept thinking a lot I also got a lot of compliments and words of encouragement from various people.
<Place where music stays corner>
#np #푸른밤 Viva La Vida- Coldplay
J: In this section, we will tell you about music related to various cities in the world. In one expression, it is a corner where you can go around the world of music with me. Today's theme was the British London there was a time when I went there for a performance, the
consequence of me going overseas for concerts or schedules frequently alot is that I feel that the fun places I go to are really nice places when I went to the UK what I felt was that ah people are living so comfortably and enjoy art alot later on if I have time I really want to visit there again privately.
#np #푸른밤 Let's Make Love-Fourplay

Jonghyun: I heard alot from the writer noona that you’re really a handsome man, a Won Bin look alike and I was so curious Jihyung: Oh I’m so sorry (for not meeting your expectations) jonghyun: no no why are you sorry to me no no I was so curious I went to look online and I
found you really so handsome since it’s a radio right now it’s even a pity that the listeners can’t see you you’re really handsome.

[Listener asking about what kind of hat is Jihyung wearing today then Jonghyun commented about how neatly well dressed Jihyung is Jihyung: to be honest I thought it was a viewable radio *laughs* }

Jonghyun : Ah it’s a shame if it was a viewable radio the listeners’ could’ve seen the handsome Lee Jihyung’s face too Jonghyun: To be honest right now I forgot to read one script paper I should’ve introduced Lee Jihyung to the blue night family but I didn’t and I’m only asking you to introduce yourself right now.

Jihyung: it’s okay right now is a good time for introductions, Hello this is Lee Jihyung rather than saying hello to the listeners I want to congratulate the main person of blue night Jonghyun

Jonghyun: ah Thank you Jihyung: When I was outside (the studio) just now I got to tune in for a bit  you said that you were nervous but your voice sounded at ease it’s like a cloud Jonghyun: oh a cloud that’s a nice expression,, a cloud and blue night do match well.The blue night’s cloud, the cloud floating in a night’s sky ah thank you for giving such a nice expression.

Jonghyun: how is it meeting me compared to how you perceived me, shinee’s jonghyun is it different alot ?

jihyung: To be honest when I used to see you in pictures or in TV appearances you had a really masculine appearance but seeing you right now your hand is pretty and it’s my first time seeing someone look so different than on TV, so pretty woah it’s really different than on tv

Jonghyun: It’s because I use makeup heavily when appearing on TV maybe that’s why I came off as manly, “your hand is pretty” and also “like a cloud” I can already feel the thoughtfulness

Jihyung: And also..you know how you’re right in front of me right ..I don’t know if it’s okay to say this

Jihyung; your neck line and wrist are really so beautiful Jong: *laughs* ah today we should’ve made it viewable radio

Jihyung: why did you have to show your arms jonghyun: since I’m nervous I’m hot and my hands keep sweating that’s why Jihyung: But why am I nervous like this *laughs*

Listener asking if Lee JIhyung will be guesting every Tuesday
Jonghyun: You will come every tuesday right?
Jihyung starts trying to answer..

Jonghyun: I will.. my wrist!! I’ll show you my wrist again!! if you come out on Tuesday ! Jihyung:Really?I have to come then! You're really
good at negotiating Jonghyun: ah thank you you promised right!

Jonghyun: (after Soran’s 혹시 자리 비었나요) Listening to the song, the lyrics feel like they’re connected to me and jihyung-ssi, when somehow a delicate story evolves between people who meet each other for the first timeㅋㅋㅋ

J: there's times when I mistakenly send texts to the wrong person too there's 2 people I know they have the same name but one is a senior and one who's the same age as me it's not that it contained any bad words but I spoke informally like "ya what are you doing" I did that mistake 3 times so now he doesn't even take it seriously

jihyung: Jonghyun-ssi what kind of food do you like
Jonghyun: I like pasta Jihyung: what do you do on your free days

Jonghyun: I listen to music and watch movies Jihyung: Oh you’re exactly the same as me Jonghyun: Oh Jihyung-ssi is like that too? then what are you doing on this weekend ?ㅋㅋㅋ
Jonghyun: To be honest I am insomniac, ever since 2nd grade of high school ? 1st grade I went to bed at around 5am therefore insomnia is like a habit that my body fell into

Jihyung: woah really just by one word from jonghyun Jong: No it’s because you’re really handsome that’s why Jihyung:Please keep complimenting me like that Jong: alright! your clothes are really so neat.

Jonghyun: when doubts arise within myself, when I get thoughts like am I really doing well? are the things I’m doing right now correct I like to lift my own confidence by saying you’re doing great right now and you will do great in the future

Jihyung: You just talked with a very soft and gentle voice but it all shows in your eyes

​Jonghyun: how so Jihyung: I can see the strong confidence in your eyes in front of me Jonghyun: Are my eyes filled with confidence
​Jihyung: yeah that’s why it’s really comfortable talking to you right now

Jonghyun: ah thank you I think it’s nice that we can talk comfortably

Jihyung: Although I’m nervous right now Jonghyun: *giggles* no no you don’t look that nervous
Jonghyun: I’m suddenly curious, whether you ever thought of another profession other than being a singer?
Jihyung: Ah for me I don’t have any profession I’d like to do instead of being a singer
Jonghyun: Oh you're so cool Jihyung: It’s not that I had always dreamt of being a singer
Jonghyun: you didn’t dream of becoming one but you ended up being a singer?
Jihyung:It was a really fun profession when I started it and while doing it with every year with age it turned out like this
Jonghyun:Then since it wasn’t originally your dream what was your original one?
Jihyung: I had really a lot of dreams ..I had a dream of being an athlete in highschool  but because of my physical condition while the other kids grew taller…
Jonghyun: Because we’re sitting right now but...I’m also on the short side height wise
Jihyung: No the way I see it both of us are over 180cm
Jonghyun: oh that’s right
Jihyung: you’re 182cm right?
Jonghyun: Oh that’s correct!! you’re 183cm right? you look like you’re taller than me a bit
Jihyung: 183cm and a half !!ㅋㅋㅋㅋㅋㅋㅋㅋ

Listener saying: I’m sorry but it really feels like tuning in to a blind date
Jihyung: So this is a blind date?
Jonghyun: because it’s our first time meeting
Jihyung: We still didn’t set a second date after this.
Jonghyun: I did it first though saying earlier we’ll meet next weekend to watch a movie
Jihyun: Jonghyun is really such a man
Jonghyun: *laughs* Oh then!... we’re both men ending of the “thoughtful oppa” with Lee jihyung corner
Jihyung: Before I came into the studio and heard that you were nervous I thought ah what to do I’m not someone who’s good at leading the discussion and creating the mood and had a worried heart but like I said earlier, looking at jonghyun’s eyes I felt comfortable   Jonghyun: Ah Thank you it’s because Jihyung treated me so well that I feel like my confidence was lifted, you spoke so well and accepted my jokes so well thank you!!
Jihyung: I can accept your jokes well even more! I think it’ll be fine to be more comfortable with me.
Jonghyun: I really liked it, first of all I really like Jihyung’s voice and I think it’s really nice that I got to solve listeners’ problems with you I hope we can do that again in the future
Jihyung: Just do one thing for me.
Jonghyun: which thing?
Jihyung: Don’t send me texts by mistake I won’t let pass even if you apologize (referring to talk earlier)
Jonghyun: Okay I will be careful when sending you messages

​Listener talking about preparing to go to Thailand alone

J: I’m not really someone who enjoys travelling I don’t think I’ve traveled much, I’ve went overseas together with the members on alot for schedules so I guess that can be counted as a trip too

Jonghyun: Not long ago I lost my wallet too but it came back to my house since I put in ID inside of it and the address is written on it they brought it back to my hands

J: There’s a meal that I really like in Singapore chili crab! they have chili crab and pepper crab there it’s popular there so make sure to eat it! I’m someone who thinks that If you go to Singapore you certainly have to eat chili crab  ㅎㅅㅎㅋㅋ
​​
​<Today, aside corner>
​Blue night "Today, aside" Poem : "Blue night" by 나희덕 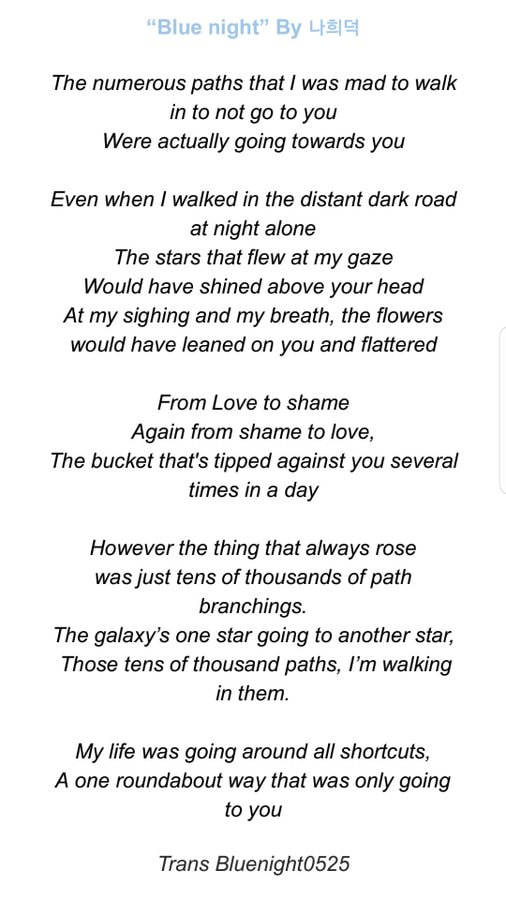 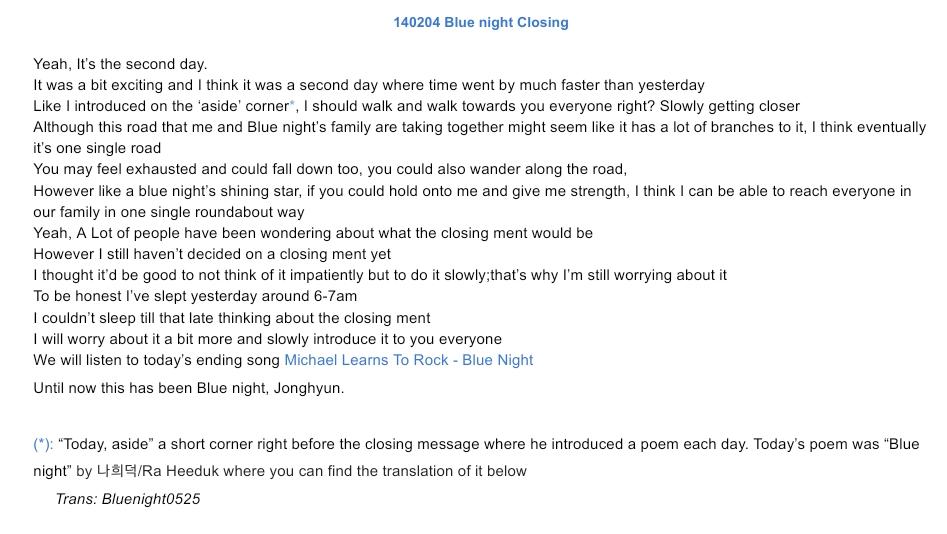 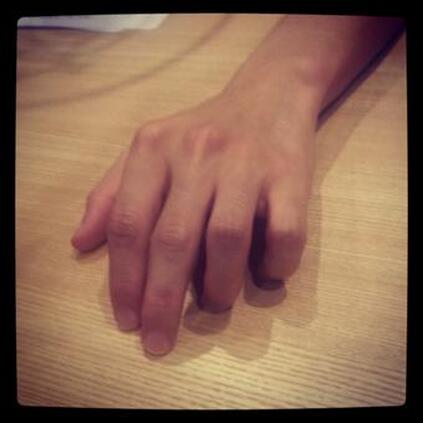