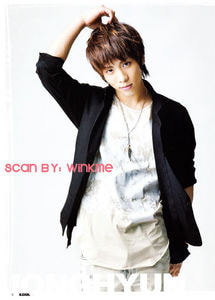 Q: What is the turning point for you to become a singer?

Jonghyun: I was in a band in high school. Back then, I wanted to be a composer. I was also trying other aspects when I was chosen by the company to be an intern, from debut till today. Because I love singing, so I also thought of becoming a singer.

Q: What is your most memorable episode since your debut?

Jonghyun: My most memorable memory is when we won the Best New Artiste.

Q: Beside music, what are your other influences?

Jonghyun: Family. My biggest influence is from my mother. My mother really believes in me, she will let me do whatever I want to do, when I was choosing the path for my future, she said “Just take the path that you want to go!”

It was the same when I was promoted to high school, I was in Year 2 when I mentioned that I was thinking of transferring schools in order to learn music, my mother always let me walk the path that I choose. It also gave me a lot of strength because of my mother’s belief in me.

Q: What are your future challenges?

Jonghyun: I would like to try composing. I believe “music is story”, I hope a lot of people can listen to the stories that I wrote, everyone can relate to it, I want to make that kind of music.

Q: What is the first thing you do when you wake up in the morning?

Jonghyun: After opening my eyes I would immediately climb out from bed and take a shower. I’m the kind that will dilly dally and idle away on bed.

Jonghyun: I like horror and thriller flicks. The most meaningful movie that I have watched so far, a slightly old flick is “Phone Booth”.

Q: How do you spend your off-days?

Jonghyun: Mostly exercising. Then to the company’s dance studio. Because it is a very friendly place since young, so I feel very relieved there.

Q: Ways to relieve your stress?

Q: Which Korean artiste would you like to collaborate with?

Jonghyun: Wheesung-hyung! We have a very good friendship. We are very similar in a lot of aspects like musically and sensibility. I think we can work well together.

Q: What about foreign artistes?

Jonghyun: No foreign artistes that I want to collaborate, but recently I think Justin Bieber “is awesome”, his debut album is not bad, wonder what his follow –up album will be like? Looking forward to it.

Q: What role do you portray in SHINee?

Jonghyun: Ambience creator? But every member is actually an ambience creator. Everyone has a good character, all wants to be there for each other.

Q: Which member would you bring along to live on a no man’s island?

Jonghyun: Key! Key ah, is the type whom loves to cook all kinds of cuisines while I’m the opposite. If I bring Key along, I feel that I would not have this kind of problems.

Q: What is your happiest moment recently?

Jonghyun: Especially happy when “Lucifer” won No. 1. Followed by doing FM, that too was a very happy moment.

Jonghyun: Music. I’m the kind whom is easily influenced by the environment. Because it’s already autumn, so ballads are not bad. Then, to create memories. Bought a Polaroid camera a few days ago, will go for a walk and taking photos.

Q: What would you like to accomplish this year?

Jonghyun: To go to amusement park with my friends, I also want to take public transport. I have never been there since high school Year 1. Ah, when we were in Osaka, we went to Universal Studios, had a great time too but I would like to go once with only my friends.

Q: What is “this thing” that you definitely can’t lose?

Jonghyun: Self-confidence. I believe for my age, I think to have self-confidence is much more important than anything.

Q: If you could see yourself back then during your debut, what would you like to say?

Q: What would you say to the present you?

Jonghyun: No slacking! Don’t forget what you want to achieve!

Q: Any resolutions for next year?

Jonghyun: To learn a lot, to feel a lot, these are what I want to say.

Q: Please leave a message for the readers.

Jonghyun: Really happy to be able to be featured in “Kool” magazine’s first issue. There will be lots of opportunities to share our news with everyone in Japan. I hope we are able to perform live in Japan again!

Jonghyun: From the first time I met Key, his character has not changed at all till today, a really independent individual.

Q: Use a colour to represent Key.

Q: What would you like to say to Key.

Jonghyun: I’m really happy when I see you moving forward on your self-path. I hope to see this Key in the future too.