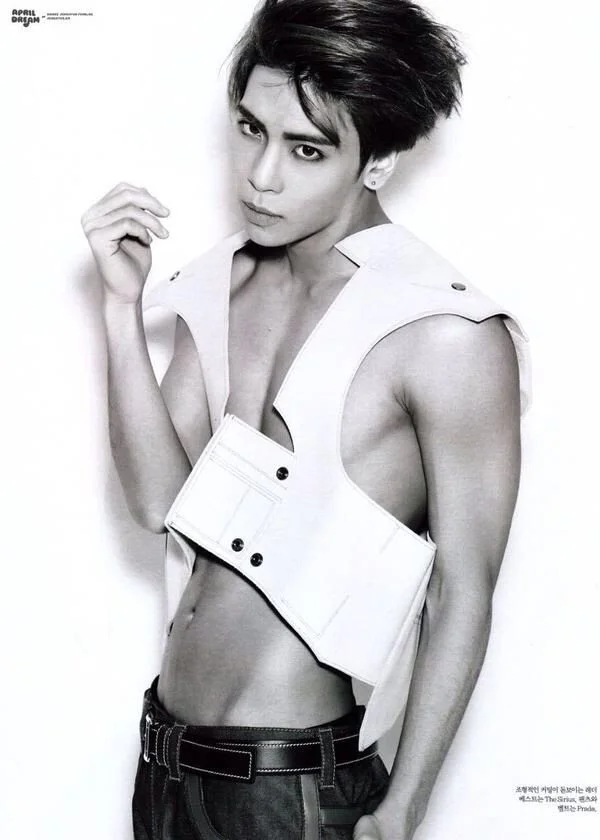 "I was worried that the ice I stood on would melt, but it luckily stayed frozen over."

With volubility that is equal to singer-songwriters, with an excellent ability to incorporate imagery with words, this is SHINee’s Jonghyun. Jonghyun’s first solo album ranked number 1 in Gaon chart, a recognized music chart in Korea. In the 3rd week of 2015, “Deja-boo” from Jonghyun’s mini album ranked in the weekly digital charts. The mini-album itself, BASE, also received good responses. Recently, in a cafe in Seoul, we sat down and talked with Jonghyun.
Q: Please tell us how you feel upon being surprised about your first solo album achieving number 1.


Jonghyun: I was really surprised. Actually before the album went on sale, I was really worried. I know I have to walk on thin ice but I was worried that it might melt. But right before everything opened, I had the feeling that the ice had firmly frozen over. Seeing “Deja-boo” rank number 1 in the charts also gave me strength. There was also a lot of interest in the lead song, “Crazy”. There was a greater interest (in my album) than I expected.
Q: Please give us firsthand explanation of three songs from your album: “Deja-boo”, “Crazy”, and “Hallelujah”.


Jonghyun: “Deja-boo” is a song I had written before. I didn’t think that I would be the one to sing it. Instead I wanted a hip-hop singer to sing it. I am good friends with Zion.T so I called out to him and he told me, “Let’s try doing this together.” In the album, this is the first song that was recoded, so it feels like it opened up gradually with my voice and hyung’s. “Crazy” was actually a song proposed by SM earlier. We didn’t use the real form but incorporated a lot of styles in it. It’s also a song that requires a lot of skill, so I felt like it’s a challenging song. “Hallelujah” was at first, not arranged with a gospel choir but was a simple, minimally arranged song. I am not Christian but originally I’ve been very interested in gospel music. I also joined the choir band in senior high school. The chorus part of this song was sang by a choir from America. It was directed in Korea by real-time video call and then confirming the voices via radio channels.
Q: In the entirety of the album, it seems that Afro-American music and Michael Jackson inspirations could be heard.

Jonghyun: That is true. Michael Jackson is the singer who had the greatest effect on me when I just debuted. It’s like I absorbed Michael Jackson with how much I copied (his vocal styles) extensively. When I sang “Love Like Oxygen” and “Juliette”, I applied Michael Jackson’s way of singing, like it’s
ingrained in my being. I sang a lot using his image.
Q: Just like your previously penned song, “Obsession”, it seems like you had fun with wordplay in your album title, “BASE.”


Jonghyun: The time I really became serious about my interest in music was thanks to the bass guitar. When I was in school, I vaguely though, I want to be in a band and happened to find our school band. Of course, I also wanted to be the vocals. Because it’s cool. However, they already had a singer, a guitarist, and a drummer. Anyway, all of the cool parts had been taken. Just like that, I played bass guitar and became fascinated by the instrument. It doesn’t stand out, but it’s the center of an ensemble. Without it, the band’s music will not take shape. In that case, I kind of used it for wordplay or a bit of cultural expression. (By using words) music can become a complete work of art that can receive sensible response. It seems that I was influenced by my mother when I was in kindergarten. She would give me 3000 won for every book I read and write a book review about. So I had to read about one book per week.

Q: It seems that your mother made a really meritorious deed. You should give her a part of your royalty.


Jonghyun: Just like that it’ll all be used. We use the card together (LOL).


Jonghyun: We didn’t really plan that my album, “BASE”, will follow “ACE”. However, during his solo teaser, Taemin used a triangular shape. When I saw it, I thought it would be nice if we use certain symbols for our solo releases. I thought it would be interesting to use a quadrilateral to associate (with Taemin’s triangle). About the title, as I said before, it was from playing bass, which became my “base” in music, that’s why I used “BASE”. C? I cannot really say anything exact about SHINee’s comeback plans.
Q: This interview will also be translated in Chinese for our weibo site counterpart. Will you please greet the weibo readers?


Jonghyun: When I became a singer, the first country we visited was China. During my trainee days when I was a high school student, I went with Taemin and Minho to Beijing to have language studies for two months. Every time since then, there is a vague feeling whenever we go to concert in Beijing. I think that’s how I feel towards China. I feel a certain affinity.

Q: How do you write your name, Jonghyun, in Chinese characters/hanja?


Jonghyun: Gold (Kin/Kim), Bell (Jong/Zhoung), String/Current (Hyun) are there. All of them has the character for gold/money. My grandfather said it’s “to yield a lot of money/gold”. My name somehow means “To be prosperous enough to live in a house so big that a bell is needed to be rung all over the house during mealtime.”
Q: During your album activities (including preparation) you were on tour and even DJ-ing in a radio show. How is your health?

Jonghyun: There’s really no particular change. However since I’ve been exerting a lot of strength, my immune system is a bit weakened so I became more prone to allergies. I also lost about 5 kg so I was a bit worried.


Q: When do you usually get inspiration for song-writing?


Jonghyun: I get ideas from places with visuals. Like a video, a picture, or a movie. There are a lot of ways to write lyrics so once an idea floats by, I start by looking around and observing the things around me. The chair, the bag, the furniture, the light bulb, things like that. I think of starting the lyrics from mundane, everyday things. Then after that I present it in my own way.
Q: There are a lot of mystery codes in SHINee’s songs.


Jonghyun: The fans unravel them well. But there are times wherein we write a song for the purpose of making people decode it. “Obsession” is one such song, in its lyrics. We even deliberately mentioned “dual personality” in our interviews (LOL). Actually, in this album there is one song which fans didn’t seem to have unraveled yet. It’s the song “MONO-Drama”. It talks about a special kind of unrequited love. The whole album is teeming with talks of love, but MONO-Drama is the only one that is about unrequited love.


Jonghyun: Actually, we thought about removing “MONO-Drama” from the album. Of course, unrequited love is related to the whole album’s integrity, but this song’s unrequited love is a little bit more severe. The situation is the song reflects that of being unable to say “I love you” and being unable to give someone my feelings/heart.
Q: Does the someone refers to “fans”?


Jonghyun: Of course, you can do that kind of interpreation, too (LOL).

Q: Among other musicians, do you have any close friends? I heard you’re close with Davichi’s Kang Minkyung.


Jonghyun: We’re close because we’re both 90-liners. It’s the same with CNBlue’s Lee Jonghyun. They are both friends who work hard in their respective genres. Our personalities also kind of match.
Q: Aside from composing, lyric-writing, dancing, and singing, what is another dream of yours?

Q: How is it that you are so fluent and good with words?


Jonghyun: It’s because I’ve been a radio DJ for almost a year. I’m constantly thinking and organizing my thoughts as I speak.
The interview mentioned the SHINee song “Obsession” a lot. During Lucifer era, Jonghyun made headlines when he said in an interview that the lyrics for “Obsession” has a hidden meaning. The hints he gave were, “the woman left to a place that cannot be seen again” and “the man has a dual personality and has a mental illness”. He said that the lyrics were inspired by a novel he read.