"I'll Come For A Rest, COME BACK AND REST TOMORROW"

Jonghyun's “Blue Night” hit the airwaves on February 3, 2014, he continued to host the show despite a hectic schedule that required him to constantly fly in and out of Korea.
As Jonghyun started DJ-ing, he proposed to the production team as an occasional regular corner of "Blue Night Jonghyun", which is not a one-off feature, or almost regular irregular corner. The title is blue night lyric, but based on the story, Jonghyun writes, composes and sings.

He acquired a new nickname on the first airing of the programme.. Two fans left a message to Jonghyun and called him "Jjong-D" which is Jonghyun-DJ shortened version. He says thank you for the nickname and he will use it well.


His voice is so soothing.
It was on during the day where I lived.
Songs composed and Lyrics on Blue Night Corner 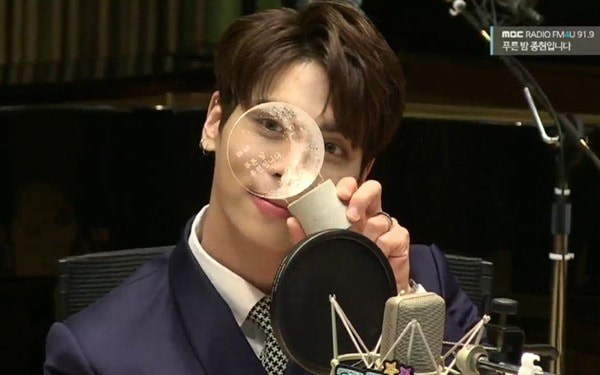 Monday: 'The Radio'
Tuesday: 'Caring Oppa'
- Help to solve listeners' issues which are troubling them
Wednesday: 'You, who come from the stars'
-Listen to problems related to love
Thursday: 'Lonely Club'
Friday: 'Long Goodbyes'
Saturday: 'Your Stories and Blue Night'
- DJ will recommend songs
- Listeners will share their own stories
- Song request
Sunday: '90s But Goodies'
- Songs from the 90s
- Guest Musicians

http://mini.imbc.com/index_140813.html?channel=mfm
Sadly some don’t work any more. However some do.

On 2017 04 04 Jonghyun spent his last day as DJ for Blue Night. MBC FM4U which lasted more than three years, 1155 days and nights.
<PD Journal> along with Chandee (nickname of Jonghyun DJ) and the last two hours of blue night listeners who could not bear tears in past time.


At 11 pm, MBC Garden Studio (open studio with glass outside) in Sangam-dong, Seoul, was crowded with more than 100 people. It was the listeners who came to see the end of <Blue Night> to start an hour later. South Taejung PD said, "I have been in a position since yesterday." The crew loaded the boxes with gifts and letters from the listeners in the couch and stacked them up in the studio. Hundreds of 'blue' letters filled the desk. 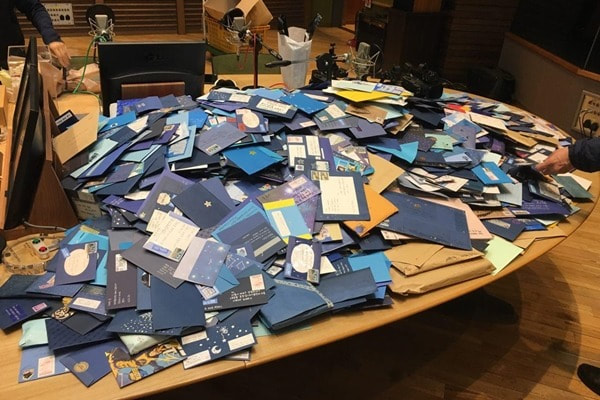 Jonghyun DJ, dressed in a blue suit, said, "It's my own way of listening to the audience and my way of saying hello." Behind him was a banner called "Away for a while - the end of the day, to meet again in our space". And 12 o'clock is approaching.
​
"Thank you for your time. I do not know if it will be all thanks to this heart, but it was a hard night and I could endure it with a blue night. "His voice reading the listener's voice began to tremble already. Three weeks ago, the 'farewell farewell', but it seemed that it was not easy to keep in mind.

By the time the studio atmosphere was calmly subdued, the young actor of the band 'Soran' who was in charge of the 'Blue Night' 'The Radio' corner and the coffee boy appeared as 'surprise guests'. Jonghyun greeted them with a surprised look. Then, within a minute, "Console C," the guest who sneaked in, "he was aware that was written," he smiled. In the end, South Taejung PD and the writers laughed together and regretted "Oh, I did not think of it".

While they were laughing and greeting, and listening to a letter from a listener who had sent Jonghyun DJ directly, Singh Yun-ha entered the booth with the production crew outside the studio. Yunha, who came to the production team as a surprise guest, wrote directly to Jonghyun DJ to write a letter to the studio.

Yoonha said, "I thank you for being here for over 1000 days." After reminding the listener, I recalled the last broadcast of the last night. All of them will be the same now. Even if it goes, I want you to eat safely and be happy. Even if it takes a long time, we will wait. " 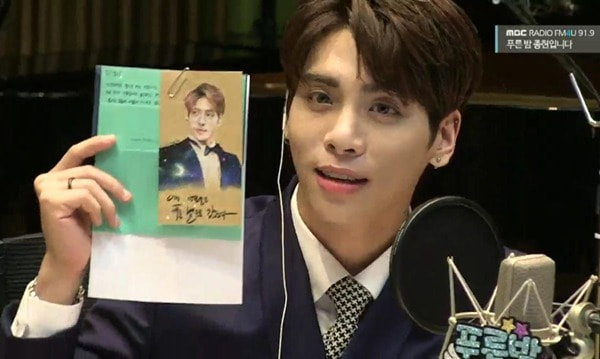 After Yunha left and one song ended, 'ON AIR' turned on, Jonghyun DJ suddenly burst into tears. When Jonghyun failed to speak, South Taejung PD played a highlight cut that summarized the broadcasts. Kim Chul Young, Yong Sung Woo, and Park Jeong-eon PD, who had been watching the Jonghyun at the production booth, watched "Blue Night" highlights together.

Jonghyun DJ said, "When you watch the clock on the DJ seats, you can see how many minutes the broadcast is left. But there was 47 minutes left. So ... "He continued to cry.

After leaving SHINee Minho, who had been searching for the last "guest who sneaked," the last signal music came out. At the production booth, the authors and PDs spoke out "Do not do it, now it is the last time."

'Tomorrow to you'. The last time of the blue night is preparing for you to begin tomorrow. The song I would like to hear today is Jonghyun's "1000". 'Maybe you and I were not exactly the time, but you and I would surely have met' When you and my blue nights were celebrated for 1000 days, I heard them together. Jonghyun's '1000' is the song lyrics.

To me, radio was a very meaningful and wonderful experience of growth. I talk a lot about it. Growth is always painful. I think it is a process of suffering from growing pains. Nevertheless, it has become a precious memory for me, and I hope it will be a memorable memory for you.

It became a big turning point in life radio. And a blue night. I do not know how many times I put my name in front of the word blue night. This sentence, "Blue night is Jonghyun", was awkward at first, and it got used to it, and the day it came time to greet it with familiarity.

Right now I'm sorry, I'm sick and teary but I will surely see you again. Maybe you and I, if it was not for the time, you and I must have met. Then, I want you to come back then. At that time, we will meet each other with much greater pleasure than now.

I really did a lot of worries about how to do the last greeting. And I decided to do as I did. Instead, I would like to say a few more words in front of him. Until now, it was Jonghyun of blue night. I'll come back for a break. You still, and goodbye, come back tomorrow ... "

"Love it"
The last word, Jonghyun, sits alone for quite a long time at the end of the song. He greeted those who had spent two hours at the Garden Studio and came out of the studio. Former PDs and writers who had gathered applauded him as hard as he could.

South Taejung PD, who played the last broadcast, said, "Yoon Hyun-woo PD, who has been searching for the last broadcast in the past with Blue Night, My voice was not coming out on the radio, so I thought it was funny ... Jonghyun was a really sincere DJ who really liked the radio. "
​
The Blue Night, who loved radio more than anyone, and loved more than anyone, has been vacated for a while. But soon, everyone joined together to 'meet again in our space.' 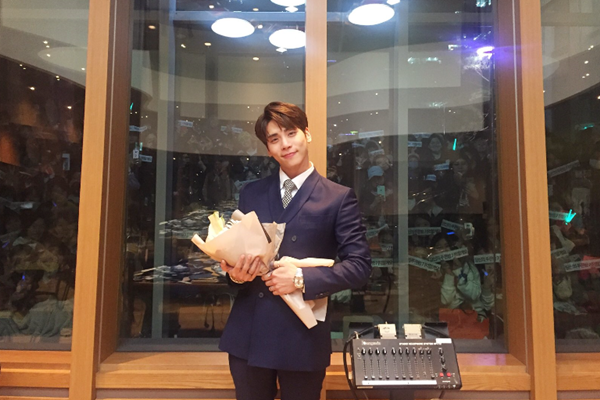